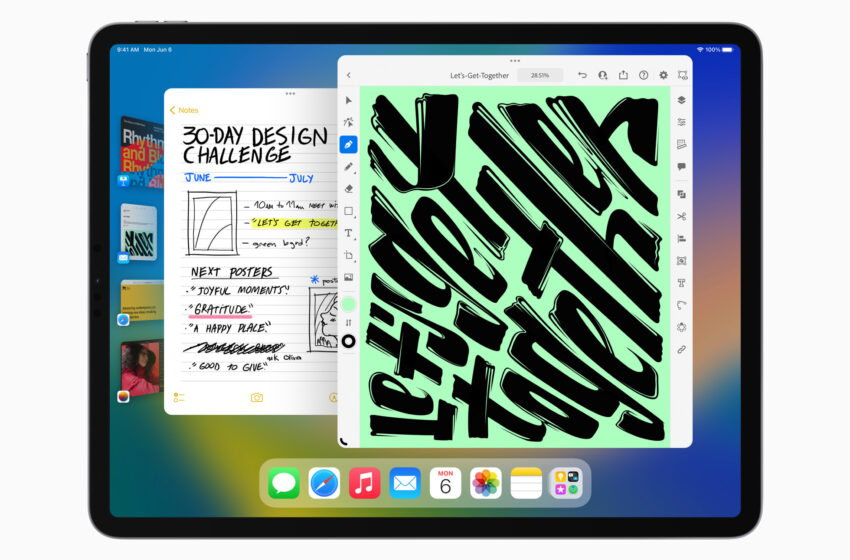 Apple had its annual WWDC in Cupertino this year, and as expected it announced a lot of new features for one of the most popular selling tablet lines in the world. Three years ago, Apple split iPadOS from iOS in order to better focus on the larger form factor. Now, Apple has launched a number of new features for iPadOS 16 including a new Weather app, Stage Manager multitasking, and more.

Craig Federighi noted that Apple wants to “create a distinct experience that’s built on the best of iOS like security, mobility, and an intuitive touch-first interface with powerful capabilities from macOS like multitasking and trackpad support. Combined with features like Apple Pencil that are uniquely iPad. All of this comes together to deliver our most versatile device.” We’ve already gone hands-on with it, so here are all the new features built into iPadOS 16.

Developers can start testing out the latest betas right away, as they were made available immediately following the event. If you are a registered developer, you can download the beta right now. Otherwise, public betas will roll out in July. Typically the final version of the software becomes available during Apple’s fall event. You can safely assume a September-October time frame.

It will be available for the following iPad devices:

iPad Pro (1st generation and up)

First and foremost, Apple pointed out that many of the same features that it introduced in iOS 16 and macOS Ventura are also coming to iPadOS 16. These include a shared photo library, shared tab groups, and passkeys in Safari. The shared photo library is an automatic library of photos shared between members of your family group that all family members have access to add, edit, or remove photos. Photos can be added automatically by date range or by identifying who is in the photos.

Additionally, iPadOS will get shared tab groups and passwordless sign-in. As previously reported, Microsoft, Google, and Apple are all working together to eliminate passwords where possible. Apple is fully embracing the concept in its newest versions of all its platforms.

Apple also introduced a brand new Weather app to the iPad. The new app will take full advantage of the large display and include animated backgrounds reflecting current weather conditions. Each module in the weather app can be tapped to provide additional data. Apple is also building WeatherKit APIs for developers to build Weather into their iPad apps.

A man’s hand interacts with an iPad.

Collaboration is the real-time sharing of an original document so everyone can work on it at the same time. It’s rather like Google Docs, but what’s neat is that you can initiate a collaboration through Messages or FaceTime directly from the share sheet. Just select Collaborate and select the conversation to which you want to share. This works in both Messages and in FaceTime.

You can also share tab groups from Safari to the group. When you do, you’ll see icons of who is looking at what tab in real-time. Additionally, Apple is opening up APIs to allow third-party developers to utilize collaboration if they want.

Freeform board on iPad

Apple gave us a sneak preview of a new collaboration app called Freeform. Freeform is a large, whiteboard-like collaborative space where a group can all work together using tools similar to those found in Notes with different bruises and sticky notes, photos, etc. It’s an infinite space in which you use touch to drag the interface around, and pinching to zoom in and out.

Metal 3 and other gaming enhancements

For the first time, iPadOS 16 is bringing Metal 3 APIs to the iPad. Apple is looking at iPads to be gaming machines with Metal 3 enabled hardware-accelerated 3D graphics. Additionally, Apple has a new API that allows larger asset packs to be downloaded in the background while you play the game.

With your Game Center account, you can find friends, track progress in various games, and view leaderboards for various games. While gaming on iOS has largely been the domain of phones, Apple is pushing to get more gamers onto the iPad and these moves are designed to do just that.

Apple is rolling out a number of desktop-class apps and features system-wide on the iPad. It’s an extensive list, but some of the ones they featured included Undo/Redo across the system, availability view in Calendar, and the ability to find and merge cards in Contacts. You can also change file extensions and view folder sizes in the Files app.

Apple also rolled out a system-wide find and replace that works in-line. Apple added a document menu in Files, Pages, and Keynote that allows you to perform common actions. Finally, Apple added the ability to customize your toolbars in some apps which allows you to access your most-used tools.

Stage manager is Apple’s new multitasking interface for macOS, and it’s here on iPadOS 16 as well. Basically, iPadOS 16 allows you to create workspaces with overlapping windows that can be moved and resized. Then Stage Manager will organize your apps into different groups and move them off to the side so you can interact with your main task front and center. It’s a quick way to move between tasks which will make your iPad that much better at multitasking. Craig Federighi called it the “foundation for a big leap forward in user experience. One that can change how our pro users get work done on iPad.”

Reference mode is only available on the 12.9-inch iPad Pro. Pro users need accurate colors in order to complete their work. According to Federighi, “Reference mode meets the color requirements in workflows like review and approve, color grading, and compositing. Where accurate colors and consistent image quality are critical. Standalone device or using sidecar.”

Finally, there are a number of improvements that are designed to take advantage of the M1 processor in higher-tier iPads. You can use display scaling to increase the density of pixels in the display and give you more room to work. You can also use virtual memory swap which means you can use iPad memory as virtual RAM for up to 16 GB of virtual memory for demanding apps.